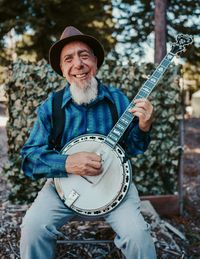 Due to a rapid increase in COVID's spread in Montgomery County, IMT and BanjerDan have decided that it would be safer to make this an ALL VIRTUAL SHOW. There will be NO in-person audience, but the performance will be webcast Live from Allyworld in Takoma Park, MD by the Grammy award-winning engineer Charlie Pilzer. Showtime will be 8pm ET, tickets are $20 and the show will be viewable for at least 48 hours after the Live performance at the emailed link.

BanjerDan returns from the west coast with a band : and BanjerDan's DangerBand has a plan to celebrate The Country Gentlemen! The BDDB (absolutely no-one calls them that) consists of Banjer Dan on banjo, Tom Gray on bass, Stefan Custodi on guitar, David Probst on mandolin and Tom Lyons on fiddle!

BanjerDan (Dan Mazer) is a “banjo-centric” acoustic musician and entertainer based in Santa Cruz County, CA. His music is an Americana mix, rooted in straight-ahead bluegrass and branching out to include folk, country, blues, oldies, and other styles.

Dan was raised in the Washington, DC area, and started playing Scruggs-style banjo as a teenager in 1974. He learned his craft during the DC area’s heyday as “the Bluegrass Capital of the World,” and earned a Bachelor’s degree in Music Theory from George Washington University. He was heavily influenced by Earl Scruggs, Eddie and Martha Adcock, the Country Gentlemen, and in particular the Seldom Scene.

Dan’s primary instrument is the 5-string banjo, but he also plays guitar, mandolin, and dobro.He has performed all over the U.S. and internationally, as a solo artist, in theatrical productions and symphony orchestras, and as a member of several bands, most notably “J.B. Beverley & The Wayward Drifters.” He has performed in venues ranging from street corner busking to bar/coffeehouse gigs, children's shows, private parties and corporate events. Some of the more notable venues include Opryland, USA, the Grey Fox Bluegrass Festival, the High Sierra Music Festival, the National Cherry Blossom Festival, and the Kennedy Center for the Performing Arts.

Tom Gray (former member of The Country Gentlemen): bass, vocals
"A two-time inductee into IBMA’s Bluegrass Hall of Fame, Tom Gray was voted the best bassist in bluegrass eight times by the readers of three magazines.  He is best known for his years as the bassist with two groundbreaking bands, The Country Gentlemen in the 1960s and The Seldom Scene in the 1970s and 1980s.  In the 1990s and 2000s, Tom played with Hazel Dickens, John Starling, and Emmylou Harris, among others, appearing on over 140 recordings with numerous artists.  He is currently performing with Valerie Smith & Liberty Pike."

Lisa Kay Howard (Valerie Smith & Liberty Pike): mandolin, vocals
"Lisa Kay Howard-Hughes's voice is a favorite of her fans -- whether it's singing a sweet bluegrass ballad or DJ'ing her own radio show.  Lisa Kay started singing and playing mandolin in central Virginia in the late '80s with her family band, Crooked Run. Later she founded the DC-based group Badly Bent, and in 2007, she began fronting The Lisa Kay Band. She has been a bluegrass disc jockey and show emcee since 1993. After nearly 20 years hosting her radio show on WAMU's Bluegrass Country, she now hosts The Old Home Place on internet station Bell Buckle Radio. Lisa Kay also performs with Valerie Smith & Liberty Pike, Level Best, and East Of Monroe."

Tom Lyons (freelance musician): fiddle
"A Hyattsville resident, Tom has fiddled in the DC and Baltimore bluegrass scene for the last 20 odd years with such bands as Dee Gunter and The Dukes of Bluegrass, John O'Dell and Windy Ridge, Only Lonesome and countless others."